King David, the Temple, Gold, and the National Debt

King David, the Temple, Gold, and the National Debt 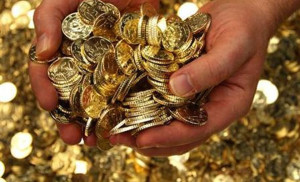 I was reading in 1 Chronicles today about all the gold King David and the rest of Israel gave for the construction of the Temple and its furnishings.  In chapter 29 it says that it was 300 tons, plus 185 pounds in gold coins.

I was intrigued.  How much gold is 300 tons?  It sounded like way too much to be accurate.  So I did some research.

Well, that sounded rational.  But how much gold is there?  Above the ground, I mean.  Is it possible that those guys could have had that much?

According to the BBC (http://www.bbc.com/news/magazine-21969100), Warren Buffett and Thomas Reuters GFMS Gold Survey agree that there is about 171,300 tons of refined gold in the world.  The article says that all that gold would fit into a cube 67 feet on each side.  300 tons compared to 171,300 tons.  There’s a lot of guessing as to what percentage of the available gold could have been in Jewish hands back then, but sure, that’s reasonable.

Then I had another thought.  How much is all the refined gold in the world worth?  Gold is currently (late April 2016) valued at about $1200 per ounce.

Our national debt is between $19 and $20 trillion.  That’s about three times the value of all the refined gold in the world.

Anyone want to return to the gold standard?

You’ll have to draw your own conclusions, I just thought it was interesting.